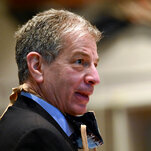 Mr. Berkowitz has continued to deny that he did anything illegal, as implied in Ms. Athens’s Facebook video. The Anchorage Police Department said it had worked with the F.B.I. to investigate

the allegations about the mayor and “found no evidence of criminal conduct.”

Before Ms. Athens posted her video online, the mayor’s office said she had left a voice message for him. In a copy of that message provided by the office, Ms. Athens can be heard in a furious rant making anti-Semitic references and saying that she would be exposing the mayor as “a pedophile.”

“I’m going to get an Emmy, so you either turn yourself in, kill yourself, or do what you need to do,” Ms. Athens said, according to the audio clip. She then said she would personally kill him and his wife.

Ms. Athens, 41, is the main anchor for two outlets, KTBY and KYUR, which broadcast online as Your Alaska Link. Bill Fielder, the station owner, said the video Ms. Athens posted had not been approved. He has demanded that she remove references to the news outlets.

“We had no knowledge of it in advance of her posting it,” Mr. Fielder said.

Ms. Athens was arrested on Friday after a physical altercation with her boss at the station, according to local news reports, not long after her initial video was posted to Facebook. She was charged with misdemeanor assault, criminal mischief and disorderly conduct and released over the weekend on bail.