From School Boards to the Senate, All Politics Is Virus Politics in 2020 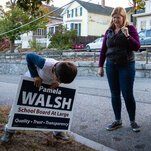 Candidates’ own cases of the virus have created all sorts of uncertainty for political races, yanking campaigns off the trail and into quarantine during crucial weeks and confounding political strategists, who

have little precedent to lean on as they try to figure out how voters will respond.

In North Carolina, a race that could help decide control of the United States Senate was thrust further into limbo this month when Senator Thom Tillis, a Republican, tested positive for the coronavirus after attending a White House ceremony. At the same time, his opponent, Cal Cunningham, is contending with a texting scandal.

In Missouri, where average new daily cases have risen sixfold since mid-June, the governor’s race is being defined in no small part by the pandemic. Gov. Mike Parson, the incumbent Republican who is leading in the polls, had resisted requiring people to wear masks and at times campaigned without one. Then last month, he came down with the virus himself.

As Mr. Parson was sidelined, his Democratic opponent, Nicole Galloway, wished him well while also soliciting donations in an effort to remind voters of their dueling positions on the virus. An online ad showed her wearing a blue mask, side-by-side with a barefaced Mr. Parson.

“Governor Parson has failed this test, and it’s apparent,” Ms. Galloway said in an interview. An accountant by training and the current state auditor, she has made public health a key issue in Zoom appearances, uses elbow-bumps on the campaign trail, and has said she will issue a mask requirement if elected.