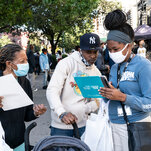 “You don’t know what makes up the 99.9 percent,” said John Thompson, a former career census official who was director of the bureau from 2013 to 2017. “It’s not how many

households you complete. It’s the quality of the completions.”

Consider Westlake Village, with more than 3,000 apartments and townhomes south of San Francisco. Counting there has been difficult because building entrances were often locked.

But in late September, an order appeared on the census takers’ government-issued iPhones: Stop interviewing Westlake residents to get details like ages and races, it said; instead, enter an estimate of a household’s occupants provided by the complex manager.

“They only had the names of the people who signed the lease,” said one census taker, who spoke on the condition of anonymity because the bureau prohibits speaking with reporters. “You didn’t know if they had roommates or family — nothing.”

Supervisors stopped interviews after deciding to wind up census-taking in that area, standard practice when a deadline looms and the remaining uncounted households seem unreachable. In this case, however, a federal judge had barred the Census Bureau from ending the count on Sept. 30, “including but not limited to winding down or altering any census field operations.”

A federal appeals court later refused to stay that order, and the Census Bureau ordered regional offices to obey it. But it is clear that in the rush to finish, some officials misunderstood the order or were told to wrap up counting regardless.